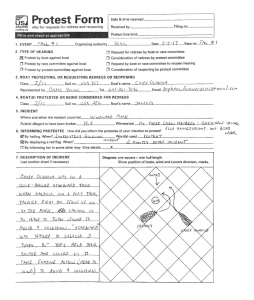 Diagram of boat Chief Oshkosh is endorsed by committee: Check

Conclusions and rules that apply

Rule 18.3: Chief Oshkosh was forced to go above close-hauled.  Boats were at six to seven knots boat speed (10-12 feet per second) and only between four and five feet apart.  Evasive action on the part of Chief Oshkosh was reasonable.  Salacia faulted Chief Oshkosh according to Rule 18.3.