The St. Croix Sailing Club was formed to encourage and promote sailing activities for all family members. Events include racing, cruising, education and special social events. We are located on the St. Croix River, just east of the Twin Cities, with member boats at marinas and on moorings from Bayport to south of Afton.

St. Croix Sailing Club is a proud member of US Sailing! 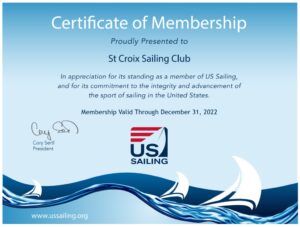 Racing
Racing events are organized to appeal to sailors of all abilities.  They include several weekend and mid-week racing series, fun races, and special regattas such as the Spring Invitational; the Breaking Waves Regatta and Commodore’s Cup (overnight race/cruise from Hudson to Prescott);  the Carlson Classic; the Labor Day Regatta; and the Autumnal Equinox.

Other social events include dock parties, picnics, chili feeds, an annual rum party, winter get-togethers, spring and fall banquets. The St. Croix Sailing Club also sponsors special events such as sailing and racing seminars, both on and off the water.

A Brief History of The St. Croix Sailing Club as compiled and written by Bill Hooper

Early boating on the St. Croix was a lot different in the 1950’s and 1960’s and really sailing in our area didn’t boom until the early 1970’s.  Prior to that most of the boats were powerboats – many made of wood – the likes of cabin cruisers. It was in this era where wooden boats gave way to fiberglass boats.  The sailing class in our area was most popular with the popularity of the C, D, A, E and M-16 Scows of White Bear Lake, Minnetonka and other Midwest states  who formed the inland lakes sailing association, and their early crafts also were made of wood.  Sailing was more popular in other parts of the world and other parts of the U.S.

The sport of sailing had become popular on the east and west coasts before the turn of the century.    It was in 1959 when Everett Pearson built the first affordable offshore fiberglass boat – The Pearson Triton 28.  He introduced it at the New York Boat Show and they sold so many they didn’t know how to keep up with production.  Sailing up until that point was pretty much a rich man’s sport, but the Triton helped change the course where the average man of lesser means, could afford to jump in and enjoy family sailing too.

So, there were a few sailors day sailing on the St. Croix and Candlemas Sailing was the one sailboat dealership in the area who thought about creating a sailing club on Lake St. Croix. It all started on July 9th, 1974 when a leaflet was placed in the mailboxes in the Afton area by Kirk Mahle owner of Candlemas Sailing. The leaflet announced the formation of the “Afton Sailing Club” and the first event was to be held at the Afton House on that Tuesday of July 9th at 6:30 pm where the dinner choices cost $3.95 and $4.95 plus $1.00 for dues.  Apparently there was a .75 initial cost as indicated on existing index cards with participant’s names and each is marked with “Pd .75”.  The event actually kicked off at 3 pm for those who wanted sail a 12′ Butterly.  The evening comprised of discussion and someone provided some films to watch.  There were 29 members the first year.

The turnout was quite good and the group elected their first Commodore, Allen Jensen and a secretary, Sandy Weiss.  During an early membership drive they announced that Member ship dues were to be $1.00 and the “ambitious” racing schedule was to be held on Wednesdays at 6:30 pm and Sundays at 2:00 pm.  It was an opportunity to meet fellow sailors on the St. Croix and afterwards there were picnics and get-togethers for films and socializing.

The first official race was August 7th and it got off to a fairly good start despite confusion from just about everyone in regards to the starting procedure.  The first buoys were white Clorox bottles bobbing in the middle of the choppy river at distances of about 2 miles apart and pretty much no one could find them.

Sandy Weiss then donated truck inner tubes, Charley Sinks donated the pipes and Kirk Mahle donated plastic flags (which were laundry articles before) and Allen Jensen donated the wood and assembled them. It was a success as they were more easily found.

The first major function of the club was the Autumnal Equinox Regatta sponsored by the Afton Sailing Club on September 14-15th and it consisted of one Saturday race and two Sunday races.  The Carlson’s (Grace and Claire of which the Carlson Cup is aptly named after) hosted the Saturday night socializing.  Commodore Al Jensen described the first regatta as “a smashing success” with “great people”. The results of the first regatta were:  1st, Bill and Sally Friedlander (Shields 30), 2nd Claire and Grace Carlson (Y-Boat), 3rd Stan and Karen Hubbard (Pearson Commander), 4th Jack Schmidtke (Lightning), 5th Mark Stephan (Venture 17), 6th Al and Beverly Jensen (Hobie 16).  Trophies were 3 deep and since no season standings were compiled the first year, this list served as the final season standings as well.  The handicap system used then was the NAYRU (North American Yacht Racing Union) Portsmouth Yardstick.

In 1975 the 2nd Commodore was Mark Stephan and the racing increased to 5 Sunday races (two in July and 3 in August) and 4 Wednesday afternoon Junior races in the same two months.  On the weekend of August 9th and 10th the first cruise took place down to the Kinnickinnic for an over-nighter.  In September they had the 2nd Annual Autumnal Equinox Regatta and on October 1st, a Wednesday evening dinner with awards. It was in 1975 that a Race Circular was developed with details on starts, rules, courses, signals, recalls, protests, handicaps, scoring and awards. And, it was this 2nd year when the first Commodore Allen Jensen and his wife Bev bid farewell, moved to Anoka, bought a San Juan 24 and started racing on Minnetonka.

There was no official newsletter, but Mark Stephan put out month “Commodore’s  Notes” which were very informative with reports on race conditions, and events of the year, including anecdotes on various members activities.  Then, in December of 1975 “River Readings” was created by Mark. There were anywhere between about eight and a dozen boats on the start line for race events and at year’s end there were 29 members of which 25 had boats that participated in events.  The largest boat appeared to be the Shields 30 owned by the Friedlander’s and the smallest was a Snark owned by Ken and Julie Spears.  I believe at this point the only ones who were members then and now are Stan and Karen Hubbard.  There are others still sailing on the St. Croix, and still around, but no longer members.

In 1976 Family Memberships were $13, Mr. & Mrs. Memberships were $10 and single, crew or sponsoring members were $5.  Crew members were considered boatless.  It was then that the first informal survey came out asking for feedback from the membership more formerly.  It was evident that the level of sophistication in the club was rising.  The by-laws were established this year and the River Readings expanded.  There was a spring dinner, sailing classes were established along with racing tactics and an increase of 6 new members over the winter.  A “Sailaway” event was introduced where boats gathered in a parade fashion to show off to onlookers and also to encourage members to sail together in a flotilla style.  They were contemplating what sort of buoy tender or committee boat should be engaged and so they were requesting someone to come forward with a pontoon boat or possible the idea of purchasing one was tossed around.  And, the decision to call the Afton Sailing Club the St. Croix Sailing Club was announced in February of 1976.  Mark Stephan continued a second year as Commodore and River Readings editor and the rest of the board of Directors consisted of 3 directors of which one also served as the secretary and treasurer.

The membership increased to 46 with 42 of them owning boats – as did the boat sizes.  Stan and Karen Hubbard sold their Pearson Commander 26 to another and purchased a Chance 30/30. The amount of races grew slightly and twists were introduced such as a staggered start for one race and a distance course for another.  A few Cruises were tossed in and the 3rd Annual Autumnal Equinox became more of a distance race (racing south of Afton) with a picnic on Saturday night.  The Fall Dinner consisted of awards and election of new officers.

Many changes have taken place over the years and the club has been faced with adversities. We’ve had the privilege of enjoying for many seasons the availability of Hank and Mary Ellen Paulson’s 41′ Chris Craft Roamer and also have had to endure no committee boat where member’s names were drawn out of a hat so that they could donate their time and sailboat to set the course and manage the race, sitting out of the competition to do so. And we’ve been blessed with the Dave O’Donnell family who rose to the occasion and became our steadfast race committee, judge and buoy tenders which now are in their 2nd generation with Race Judge Patrick O’Donnell and continuing family members. SCSC started out as a racing club, but quickly included the cruising element to accommodate those who enjoy sailing, but not necessarily racing.  Our group has extended their horizons to other bodies of water and our members have enjoyed racing on various levels elsewhere and cruising to exotic waters elsewhere as well. We all have one common denominator – sailing, sailboats and all that it entails. It’s a way of life.

And so the St. Croix Sailing Club continues to grow to what it is today. Through the years there have been many changes, advances, new members, members lost and many different approaches to racing, cruising, socializing and the growth of the sailboats in size and sophistication.  But, the basic tenants exist to this day with the same goals of enjoying the beautiful Lake St. Croix and where it takes us and the perpetuation of sailing and education and fun for the membership – made possible by the efforts of the members.